The IB aims to fosters a sense of civic-mindedness and social engagement, as well as academic rigor. Kalyani is a shining example of continuing that commitment to making the world a better place. After gaining a scholarship to study the IB Diploma Programme (DP) in Singapore, she has returned to India to pursue an integrated master’s degree in humanities and social sciences with a focus on development studies. Her goal is to continue to pursue academics while working to improve the lives of those around her. 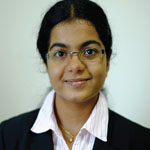 After seeing an ad in her local paper for a scholarship to study the DP at the Global India International School in Singapore, Kalyani decided to apply, and was awarded one of only 10 offers extended that year. She was well selected, as she went on to earn a near-perfect DP score of 44/45. She was motivated to try the IB because it offered something interesting and new after studying Indian curriculum her whole life, and allowed her more breadth of study and the opportunity to engage in research. “I wanted to do the IB because I didn’t want to just choose one stream, like science or commerce, I wanted to do a combination of them both…I’d also heard that it’s a really interesting way of learning things that is different from the regular curriculum.”

She particularly enjoyed the school organized service learning trip for CAS. “We went to Chang Mai, Thailand. We went to this rural area where we worked with kids for two to three days, and I got a different view of how kids cope with living in conditions that are not so well off. I really enjoyed interacting with them and learning about how they lived their lives. I found that the most impactful part of the IB.”

Kalyani is currently at the Indian Institute of Technology (IIT) -Madras undertaking an integrated master’s in humanities and social sciences, with a focus on development studies. “I’m very interested in economics and development, because I live in a place where I see a lot of poverty and corruption, and I wanted to improve the situation.”

Initially, she was a bit nervous about the transition to Indian higher education, but she says, “IIT-Madras is one of the leading universities in India. They are pretty forward thinking, and unlike other universities in India, they are not focused on rote learning and memorization. So I felt the shift was pretty smooth.” She feels that higher education opportunities in India, such as the one at IIT-Madras, are a good match for the type of preparation she received while in the IB. In India entrance exams are often required, and though Kalyani did feel the extra pressure to prepare for the entrance exam in April, she reminds her peers to keep in mind the values IB teaches when preparing for the transition to higher learning.

Part of the national service scheme, Kalyani currently works on a project assisting blind students, and plans to join other projects next year. In her spare time, she pursues a passion for music by playing the violin and singing classical Indian music. She has also befriended several European foreign exchange students at her university and helps to introduce them to Indian culture and life. After graduation, she plans to work at NGO for a period and then pursue a PhD in a development related area.

“I felt the IB actually helped me in university, as I could take university life with a lot less stress than my peers.”

Learn more about the Diploma Programme