Catherine Franklin completed her Diploma Programme (DP) studies at the International School of Hout Bay in Cape Town, South Africa. She has studied journalism and is now working at Condé Nast’s House and Garden magazine as a content producer. 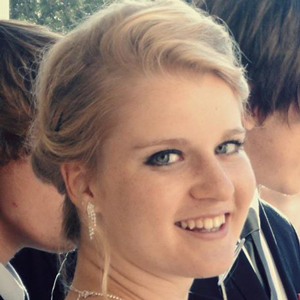 When my school originally started offering the IB diploma, I knew little about it, and when I started the programme our class was only the second class to do the IB diploma at our school. It wasn’t necessarily a conscious decision for me to do the programme, as it was the only course offered by the school I was already at. However, as I completed the IB diploma, I was very thankful to have been able to do it, as it helped shape me into the person I am today.

Tell us about your current work—was there a moment when you knew you wanted to pursue this career?

I recently worked as an intern copywriter for a digital innovations company called Liquid Thought. I studied to be a journalist, and was just hired as a content producer for Condé Nast’s House and Garden magazine. I was lucky enough to have decided on my career while I was still in high school. I realized that I loved writing, and was actually good at it, which was my first step in my journey to becoming a journalist. I grew more and more passionate about the media and journalism as I discovered more about it. The defining point for me was when I discovered The Bang Bang Club—a group of journalists who documented the war between the Zulu and Xhosa tribes during apartheid. You might know them from the iconic Pulitzer prize-winning photograph of a young African child suffering from malnutrition with a vulture behind him. This group of journalists inspired me to pursue journalism, and since then my passion for it has only continued to grow.

As an IB student, how did you shape your IB diploma studies to your interests? What courses were most valuable?

When I began the IB diploma, my school had only recently started offering it and had only a few subjects. The most valuable ones for me were English and business studies. English taught me important skills that I took into my university years, such as essay writing, critical analysis (which I apply to almost every aspect of my life), and an increased passion for writing. Business studies I found very important, as it helped me understand how businesses work and gave me some managerial skills. I believe that business is something that everyone should have a basic understanding of, as we all have to work in some aspect of business no matter what career we pursue.

What inspired you most as an IB student?

For me, inspiration came from the responsibility IB gave me. It taught me that there’s no one in this world who’s going to save you except for yourself, and that in itself was incredibly liberating. I strongly believe that IB gave me the basic skills to become who I am today, even if it all it did was spark a side of me that hadn’t made itself known before. IB inspired me to do better, and take control of my life.

Did the extended essay, TOK, or CAS prepare you for university? Are there skills you developed that you still use today?

TOK is something I would not be able to describe to anybody, but I believe that it gave me invaluable skills, and it taught me to question everything rather than just accept the status quo—this is a skill that has become very important in my role as a journalist.

Although CAS was not so prominent in our studies, I still understand the importance of it. We forget that school isn’t only about academics—it’s about shaping the next generation, and many schools these days lack courses that allow students to become well-rounded people. CAS was something that broadened my outlook in terms of gaining perspective on different communities and lifestyles, as well as allowing me to embrace my more creative side.

I was quite optimistic, and probably naïve, when it came to choosing my extended essay. Although it is recommended to write something about a subject that you are studying, I decided to ignore that recommendation and write an essay based around psychology. The study I conducted (how physical attraction relates to underlying survival tactics) was very interesting for me, and certainly improved my writing style, as well as my ability to conduct research.

Did you face any obstacles during your education, studies or career?  How did you overcome them?

The main obstacle my entire class faced was the lack of resources our school had—we didn’t even have our own sports field. However, we made do, and managed to produce extraordinary results despite the lack of resources. When I finished university, with honours, I struggled to get a job in my career field. This had little to do with my abilities, and was more to do with my lack of experience, governmental laws in South Africa, and a lack of available jobs. However, I got a job as a waitress, and it was probably the best decision I’ve made so far. It allowed me to gain independence, get used to working, and pushed me to continue searching and not give up even when the outcome was looking bleak.

What advice do you have for current IB students that are thinking about a career like yours?

I find that the key skills for my career, despite the obvious ones of being a good writer and researcher, is an ability to empathize and understand people, as well as to continuously keep an open mind by constantly challenging your own beliefs and the system that you have grown up in. I believe that as humans we have the ethical responsibility to leave our society better than how we found it. This is the only way for us to keep moving forward. As a journalist, my aim is to strive to make our world better through informing, and building awareness. So the main advice I would give any journalist, and any person in general, is to maintain an open mind, question everything, and continuously strive to be better.

Learn more about the Diploma Programme