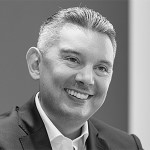 Mike Dargan has extensive experience in technology, operations, financial strategy, and corporate mergers and acquisitions. He’s a strong advocate for embracing technology and agile ways of working in banking and believes that culture is key to the effective use of technology. He has lived and worked in the US, Asia, and Europe.

Mr Dargan is Chief Digital and Information Officer, for UBS, the world’s largest wealth manager. He’s also a member of the UBS Group Executive Board and President of UBS Business Solutions AG.

Prior to joining UBS in 2016 as Group Chief Information Officer, Mr Dargan held various positions at Standard Chartered between 2009 and 2016. He joined Standard Chartered as Head of Strategy for Global Markets and then held a number of roles within Technology and Operations before becoming Chief Information Officer for Corporate and Institutional banking.

Prior to Standard Chartered, Mr Dargan was a Managing Director for Merrill Lynch, where he led corporate strategy for Europe, the Middle East and Africa as well as the Pacific Rim region, and was a member of the regional operating committee. Before Merrill Lynch, Mr Dargan spent five years at Oliver Wyman, where he led the firm’s expansion in Asia.

Presently, he serves as Board member and Treasurer for ICS Inter-Community School Zurich, a fully accredited International Baccalaureate World School.

Mr Dargan graduated with honours from Oxford University with a MA in Politics, Philosophy and Economics.